We’ve shared one of the original recipes for the Mai Tai, which did not contain any pineapple or grenadine – it was made with rum, orgeat (almond syrup), fresh lime and curacao (orange liqueur). Over time, as the Mai Tai was modified by bartenders, and made its way to Hawaii, it was changed – you’ll find lots of drinks sold under that name, many of which bear little resemblance to the original, aside from the rum foundation and probably some lime. The Mai Tai most commonly seen in Hawaii these days is a very different style, and does use pineapple and grenadine.

To denote the difference, we included the reference to Hawaii in the name. And now we want to go on a trip to investigate (sample) the Mai Tais in Hawaii! 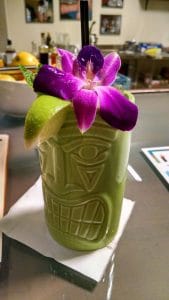 Shake ingredients with ice, strain into a tiki mug (or a double old fashioned glass, or Collins glass, or even a goblet) over fresh ice. Garnish with a sprig of mint, a lime wedge and an edible orchid, if you have one.

Instead of mint, we are garnishing ours with pineapple sage this summer, which adds some bright green and intriguing aromatics to the cocktail – we grow it right outside our front door!

Find past editions of our monthly newsletters HERE

Search for a Recipe:
Cocktail Repository
Visit our online cocktail guide, which is sorted by spirit, for more recipe ideas, and find the archive of past cocktail posts and other news here. 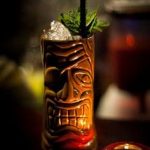