These past few days have seen record-setting cold here in the Chicago area, with forecast lows in the -20s, and a high yesterday of -11˚F (and windchills in the -50s). So, like many businesses, we decided to close down and discouraged our staff and customers from venturing out in the weather. With a cold-weather day on our hands, we decided to do some experiments. After all, this is the first time we’ve ever had such frosty conditions available to us!

Freezing Point of Vodka & Other Spirits

We’ve all been taught that the freezing point of water is 32˚F. Now, that doesn’t mean water definitely will freeze at 32 degrees – it takes some energy for liquid water to convert into a solid, and by manipulating other factors, water won’t necessarily freeze, even if the temperature is lower that 32˚. See this cool article from the Smithsonian about that topic.

Similarly, according to our chemistry manuals and other book sources, 80 proof vodka (40% alcohol by volume) has a freezing point of -10˚F (a bottle of our aquavit, at 45% abv, would have a freezing point of about -18˚F).  Since it was going to be at least that cold around here, we figured we ought to put some bottles of spirits outside and find out what would happen.

We left everything outside on Tuesday night, when the reported temperature started at -13 and dropped to -24. Everything was on our front porch – the bottles were inside the box, the ice cubes were on a concrete surface. Observations on Wednesday morning: 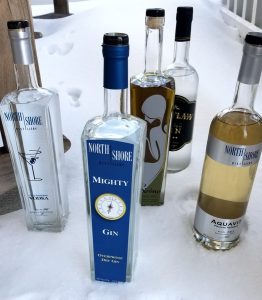 The temperature did not rise above -11 (-9 on our front porch, according to our trusty weather station given to us by my father). Around noon, we took all the bottles out of the box and separated them. They weren’t getting cold enough, obviously.

On Wednesday night, the air temperature dropped to -25 or so, and we left everything out on the porch all night. When we got up in the morning, it was still -24 (around -18 on our porch). So what did we find?

So. What Did We Learn?

We had a lot of fun with this set of experiments! It was really interesting to see what would happen and speculate about it. Since we have never actually tried to freeze our vodka before (nor any other spirits), we weren’t 100% sure what would happen. One thing we learned is that our house radiates a lot of heat. If we have a chance to do this again, we will put the bottles further away from the house, to allow the alcohol to reach the coldest possible temperature. Here’s what else we learned:

All in all, a fun way to spend our time during the arctic conditions. We learned a few things, had some fun, and had some delicious drinks, too!

Email Newsletter Archives
Find past editions of our monthly newsletters HERE
Latest Cocktail Posts
Search this Site
Full Archive
Looking for a past article, or want to comb through our archives? HERE YOU GO 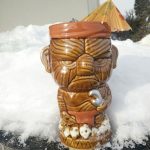 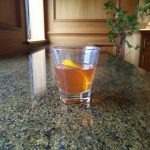