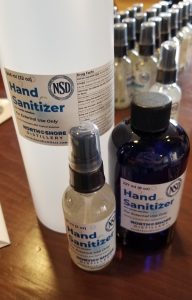 It’s mid-May 2020, and we have been making hand sanitizer for nearly two months now. It’s not something we ever envisioned doing as a business. It’s been quite a journey, so we thought we’d share a bit of that story here on our website for posterity. We are so happy that the supply chain has caught up, and we no longer need to crank out hand sanitizer the way we did when we started. And we are proud of ourselves for stepping up to do what we could to help in this unprecedented time.

Do it Fast, Do it Right

We were the first distillery in the entire country to actually get all the way through the FDA’s registration process for making hand sanitizer. Some distilleries decided not to follow the FDA safe harbor, but we felt it was the best way to go, so we did. It was extremely cumbersome and very foreign – one of the hardest and most frustrating projects we have tackled in a very, very long time. In the interest of helping our fellow craft distillers and others in the industry make hand sanitizer and do it the right way (which means complying with the FDA’s guidance), we immediately put together some tips based on our experience navigating the FDA’s website and shared them widely. We viewed this as an opportunity for our young industry to step up, do our part, and do it right – and show the country that we could contribute in a productive way during this crisis.

By March 23, we were off and running. We received so many urgent calls from first responders and hospitals who were scrambling and did not have enough hand sanitizer, and we were literally cranking it out as fast as we could and scrambling to find containers we could put it in. We also heard from a number of funeral homes who didn’t have any, and we learned a lot about the funeral business in the process. This urgent scramble continued for several weeks, as our bottle suppliers wondered why we wanted so many small containers, and at first they didn’t appreciate the urgency in our voices as we begged them to help us find more. We were constantly on the prowl for the other needed ingredients, like hydrogen peroxide and glycerine, which were also very hard to source, so we had to be resourceful, creative and persistent.

Over the next few weeks, we donated hand sanitizer to many, many police and fire departments, many hospitals, as well as a number of homeless shelters, food pantries, nonprofit senior care facilities, hospice and home health agencies and a number of facilities that take care of the most vulnerable members of our community.  Hundreds and hundreds of gallons, spread as widely as possible to ensure that everyone got some. Because of the uncertainty, we had to allocate our supply, which was actually quite stressful – we were constantly trying to do the right thing and spread the hand sanitizer around our community like icing, rather than cream cheese, since we knew we only had so much.

Support the Local Community Too

When we have had enough left over to do so, we also sold hand sanitizer to individuals and other essential businesses in our area, and we are continuing to do so for local businesses getting ready to reopen, as well as individuals who have a need. The sales have helped fund all the donations, and also allowed us to provide hand sanitizer to many in our community who could not find it anywhere. We are glad to have been able to offer this to our community, and we are continuing to do so for the time being.

The intense pressure has lessened, and we are grateful. We now have businesses and consumers price shopping for hand sanitizer, asking for quotes and such – and we are sometimes more expensive than other options. Some of that is because of the size and scale of our operation and how we’re making our sanitizer, and some of it is because we built the donations into our pricing model, rather than starting a fundraising campaign. We are looking forward to getting out of the hand sanitizer business soon, and returning to our real passion – making great spirits, and sharing them and great cocktails with people. We miss that immensely, and we look forward to being able to welcome guests to our distillery again, and to visiting all the great restaurants and bars that we work with again.

Here’s a picture of some of the wonderful thank you notes and card we’ve received. We are so happy that we could help in this way, and support the many heroes who are literally risking their lives to take care of the rest of us. It was something we were uniquely positioned to do. So many others in our community are doing the same, and we are so grateful. 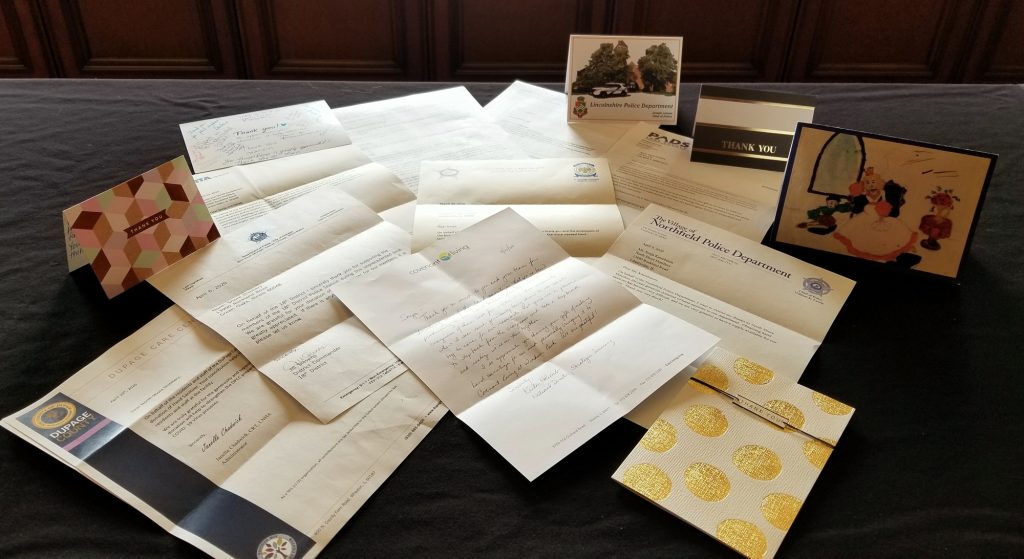